﻿By the application of scientific methods, the mission of the NSCAD University Drawing Lab is to achieve a better understanding of the artistic process and its inculcation through training.

​​While Maycock & Klein stayed in touch informally, the idea of a formal collaboration lay dormant for eight years by which time technological advances in eye monitoring equipment, and more focused questions brought the two groups back together. Seeking an answer to the question of where people look when drawing from observation became the catalyst for establishing the NSCAD University Drawing Lab, which opened in the refurbished Morse's Tea Building that, at the time(2005), was rented for NSCAD studio/teaching space.

With the support of SSHRC, the lab was equipped with an Eyelink II, computers and digital video recording equipment, and NSCAD drawing faculty and students participated in the first series of experiments. 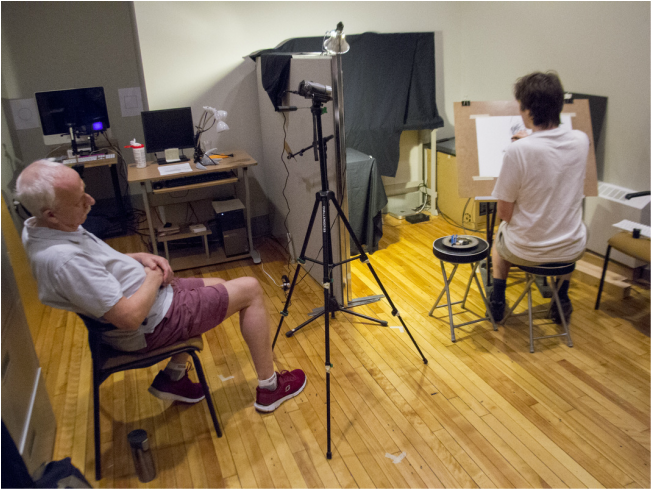 Researcher Bryan Maycock observes a NSCAD student during drawing experiment
​Since that time, a number of experiments have been completed and reported upon; more are underway and others are in early stages of planning. The number of researchers has increased to five, the equipment expanded to include digital drawing tablets and a manager appointed to run the daily business of the lab. NSCAD University’s Drawing lab is now well established within the academic community.

This website contains details of the Lab’s history, the facilities, the people involved and information about studies both completed and contemplated. We encourage you to explore it.
Powered by